The 2010 Open Championship at St. Andrews 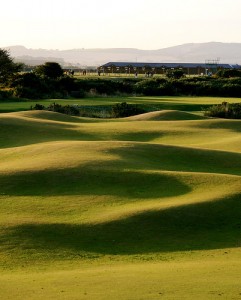 For golfers and fans of the game, there’s no destination quite like Scotland. With hundreds of courses across the country, including some of the most famous in the world, there is no more complete golf destination. This only becomes more true when the Open Championship comes to Scotland, as it does every four or five years. In 2010, the Open is coming to St. Andrews, one of the most storied and challenging courses in Scotland, and for any lover of golf thinking of a trip to Scotland, this summer is the perfect time.

The Open Championship is one of golf’s four “Majors”, the only one hosted outside of the United States. Unlike the Masters, the Open is not tied to one course. Each year, a different classic course in England or Scotland (or one time only, Northern Ireland) is given the honor of hosting the event. The Old Course at St. Andrews, arguably the greatest golf course in the world, has been host to 27 Open Championships, and since 1990, the tournament has been here once every five years. In both 2000 and 2005, Tiger Woods won here, emulating one of his heroes, Jack Nicklaus, who also won two Opens at St. Andrews. The high roughs, unpredictable weather and world class competition make this one of the ultimate prizes in golf.

If you are planning on visiting St. Andrews during the Open Championship in 2010, here are the important details. The tournament is being held on 15-18 July, 2010, on the Old Course at St. Andrews in Fife, about a 30-mile drive north of Edinburgh. Hotels and hostels in and around Fife (and even farther away) go extremely early, as this is not only the biggest golf event of the year in Scotland, but arguably the biggest every five years, with the most prestigious tournament coming to the most famous course in golf. The earlier you plan your trip, the more likely you will be to have your choice of accommodation and the closer you will be able to stay to the action. Also make sure to book your flight to Scotland early, as again, this will be a very busy time to visit.

For golf enthusiasts wanting to stay in Edinburgh in style, check out our list of Edinburgh’s Five Star Hotels. Otherwise, use the form below to search for hotels in Fife.