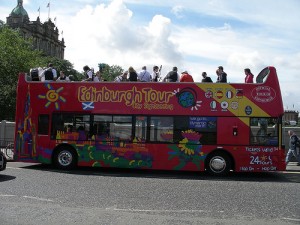 While there are plenty of low-cost carriers serving Scotland, the distances between major cities aren’t that big so flying is not always an option. Which leave bus travel and train travel competing for attention. If you are on a tight budget, bus travel is definitely the option for you, especially if time is not an issue. Plus, the roads in Scotland are both safe and well maintained. The bus network is efficient, well-maintained and fast.

Getting to/from Scotland by Bus

There are plenty of connections between Scottish cities and other cities in the UK. National Express is the main operator. There are also a number of bus companies operating services within the UK, such as:

Getting around Scotland by Bus – From One City to Another

Just like getting from other parts in the UK to Scotland, getting around Scotland by bus is cheap and a good alternative if you have time. Particularly at peak times, getting out/in of Edinburgh or Glasgow can be painfully slow.

Megabus remains the cheapest way to travel in Scotland, with departures from Aberdeen, Dundee, Edinburgh, Glasgow, Inverness and Perth, connecting these cities (aside from connecting to other cities in the UK). You can only book tickets on line (30min to 45min before departure).

Citylink offers 200 connections within Scotland. Buses from Edinburgh to Glasgow leave every 15 minutes and the fare is £4. Passes are available.

Some rural areas are only served by Postbus . It operates minibuses carrying mail and ten fare-paying passengers. It’s a slow way to travel but a good option if you want to get to a remote area.

Getting around Scotland by bus – Within a City

In Edinburgh there are two main bus companies: Lothian and First . They use the same bus stations but the route numbers and the tickets system are different. Single tickets for Lothian Buses are £1.30 and are valid for one journey. There’s also an all-day ticket for £3.20. There are also four companies which operate sightseeing buses (and all are owned by Lothian) .

In Aberdeen there are also two bus companies: First and Stagecoach . Day passes are available (for £3). The company mostly runs services within the city and to the suburbs. Stagecoach runs services outside the city. The day pass is £11.

In Glasgow buses go everywhere. The main operator is First Glasgow . An all day pass costs £3.50, while a weekly ticket is £14.50. Other bus operators within the city are : Arriva and Stagecoach West Scotland, which operate services outside to the outlining towns.

In Inverness there are about 50 routes operated by Stagecoach Inverness and Rapsons Highland . The average fare within the city is £1.25 single adult.