Visitors to Scotland come for many different reasons, but usually have a few things they would be disappointed to leave without seeing, and on the top of that list is castles. The historic stone fortresses that dot Scotland’s landscape, especially in the Highlands, are some of the most popular and iconic travel destinations in the country. For those visiting Edinburgh, as most Scotland visitors do, there’s no need to go too far out from the capital city to see a Scottish castle, because there are plenty well within the city limits.

As you can see from the map below, most of the castles are located west of the city centre. They are all within very close driving distance, but if you have very limited time and can only visit a few, I would recommend first and foremost to see Edinburgh Castle, the most visited attraction in the city, and then to follow the coast westward, a path that will take you to Lauriston, Cramond and Barnbougle.

Edinburgh Castle: Of course, if you want to see the most important castle in the area, just look up and turn your head, and there it is. Towering over the city from its seat on Castle Rock, there’s no missing Edinburgh Castle, and no excuse for not taking a closer look if you have at least one day in the city.

Merchiston Castle: Just south of the city centre lies Merchiston Castle, now part of Napier University’s campus. Seat of the clan Napier, this was a castle that certainly found use as a fortress, evidenced by the cannonball found embedded in its wall during restoration. 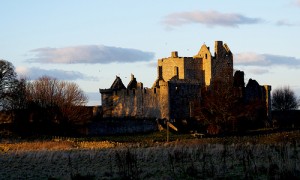 Craigmillar Castle: Situated in the southeast quarter of Edinburgh, Craigmillar is one of the most fully preserved medieval castles in Scotland, and being right inside the city, should be on everyone’s Edinburgh travel plans. The main tower was built sometime before 1425. (Photo by keepwaddling1 on Flickr)

Liberton Tower: It must be said that Liberton Tower is not the prettiest castle in Scotland. A simple square tower, it was built for practicality sometime in the 15th century and for castle enthusiasts gives a great example of the most basic form of castle construction.

Craiglockhart Castle: Like Merchiston, this castle is now part of a Napier University campus. It is one of the most ruined of any of the castles on this list, and only two of the original four levels still exist.

Lennox Tower: Another ruin, Lennox Tower is most famous these days for one of its ghostly inhabitants. For years, people have reported seeing a figure known as the White Lady, gliding over the grounds. It is said to be the spirit of a war widow, and draws ghost-story tourists to the ruins to this day.

Bavelaw Castle: Of all the castles on this list, Bavelaw is the farthest from the city center and the farthest one inland, sitting in the Pentland Hills southwest of the city. It was used as a hunting retreat by several kings and queens, including James VI.

Craigcrook Castle: One of the more recent castles in the area, Craigcrook was built sometime in the 17th century. It is best known as the home or refuge of several important writers, and literary events there were attended by guests like Alfred Lord Tennyson, Hans Christian Anderson, and Charles Dickens, making it an important part of Edinburgh’s rich literary history. 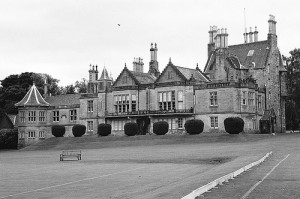 Lauriston Castle: Though not well known by many tourists, Lauriston is one of the most picturesque castles in the area, not only for its well-preserved 16th century tower but perhaps moreso for its position overlooking the Firth of Forth. (Photo by Edd! on Flickr)

Barnbougle Castle: Like Lauriston, Barnbougle lies right on the shore of the Firth, and is the site of another famous Scottish ghost story. According to local legend, the ghost of a hound once belonging to the master of the house still bays at night, waiting for its master to return home from war.

Cramond Tower: Once the home of local bishops, Cramond Tower was ruined and overgrown until its purchase by the current tenant in the 1970s, who restored the tower to a much more livable, and more attractive, state.