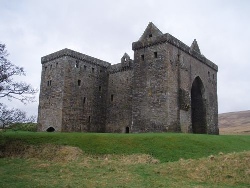 Castles are imposing, romantic and sometimes down right spooky! In Scotland most of the castles have been built by clans and have been inhabited by the same family for hundreds of years. Some of the castles which are now in ruins create such a romantic setting that they are some of the most photographed structures in the country.

A bit of history
The first castles were built in Scotland in the 11th and 12th centuries thanks to the Norman influence. Around 1200s, the motte castles were replaced by stone built ones. Between the 14th and 17th centuries, the castles had modest tower houses and rather modest defenses.

By the late 18th century, the medieval style architecture was revived and the castle like structures appeared again. Although they had no defensive role, the architecture used made them real works of art.

Over the centuries there have been more than 2,000 castles in Scotland although some are known only from historical records.

Most important castles in Scotland

Cawdor Castle
Most famous for its mention in Shakespeare’s Macbeth, Cawdor Castle lies just east of Inverness and is one of the most accessible and well-preserved castles in the Highlands.
>> For more information, check out my guide to Nairn and Cawdor Castle.

Traquair House
It’s the oldest inhabited castle/house in Scotland. It dates back to 1107 and it was originally a hunting lodge. Today, the castle is a very popular destination for tourists but also a very romantic setting for weddings. Several events are held in the castle every year, such as Traquair Medieval Fayre, St. Ronan’s Tattoo, Shakespeare at Traquair and Halloween Experience.

The castle is generally opened daily until 5 PM. In April and November it’s opened only during the weekends.

Castle Urquhart
The castle stands on a rocky promontary on the north shore of Loch Ness . The earliest record of a castle existing in the area dates back to the 1200s. Although it’s now in ruins, parts of the walls and the keep are still standing which makes a visit really worth while.

Mary Queen of Scots House, Jedburgh
The castle is known as Mary Queen of Scots’ home and is now a world famous museum. Filled with tapestries, oil paintings, furniture, armors, arms and personal possessions, the museum is generally opened from March until mid-November from 10 AM to 5 PM.

Strome Castle
Build on a rocky promontory along Loch Carron, the castle had a strategic location to oversee the entire area. The castle was built around 1400 and is now in ruins. It is not particularly popular with tourists for whatever reason so if you decide to visit you might find yourself alone exploring the area.

Caerlaverock Castle
The building began at the end of the 1200s and by the 1300s it already earned a reputation of being a very strong castle. Although in ruins, the castle is well worth a visit. Located in an unspoiled countryside and still having the sophisticated courtyard residences dating from the 1600s, the castle is a great example of the classical style.