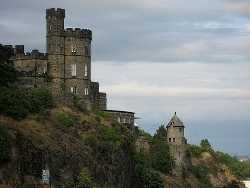 Edinburgh Castle, perched on top of Castle Rock, dominates the city of Edinburgh . The castle is the second most visited landmark in Scotland.

Human inhabitation dates back to the 9th century BC although few of the castle’s structures, as it stands now, predate the Lang Siege of the 16th century.

Edinburgh Castle is one of the few castles which still have a military garrison, although only for ceremonial and administrative purposes.

The oldest structure still standing is St Margaret’s Chapel, which dates back to the 12th century. It is not only the oldest building in the castle but also Edinburgh’s oldest building and a fine example of Norman architecture.

Right at the top of Royal Mile and in front of the castle, there’s the Esplanade. It’s the location where the Military Tattoo takes place each year.

The entrance to the castle is from a Gatehouse which is flanked by two statues: Robert the Bruce and William Wallace. Also at the entrance there’s the dry ditch and the Drawbridge.

David’s Tower started to be constructed in 1386 and was enormous by the standards of the time. The tower was initially the main entrance to the castle but was expended to include more rooms. The collapse of the tower took place during the Long Siege.

Half Moon Battery has been constructed to replace the old tower. Several rooms from the old tower still exist under the current construction.

Crown Square sits at the top of the castle and is the citadel created in the 15th century.

The Crown Room is located at the first floor of the Royal Palace. It contains the Honours of Scotland, which are the Scottish Crown Jewels and Regalia.

The Great Hall was built in 1513 and was used for meetings of the Parliament of Scotland.

Queen Anne Building used to house the kitchens back in the Middle Ages. In 1933 it was remodeled as the Naval and Military Museum.

Scottish National War Memorial was originally the site of the St. Mary’s Church in the Middle Ages. It was converted to armory and then transformed into the current war memorial.

National War Museum of Scotland was initially the site of the gunpowder magazine. The north storehouse now houses the museum.

If you bought the Explorer Pass you can get discounts when visiting the castle.

>> For visiting other attractions in Edinburgh, check out the Edinburgh Pass.