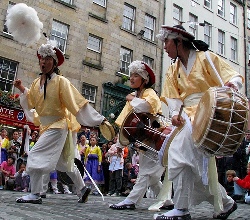 Edinburgh Festival is a generic term used to describe the cultural explosion which takes place every August in Edinburgh .

Without a doubt, the most important of the events is Festival Fringe. Also, from the 1940s the International Festival started to be identified with Edinburgh. But these are not the only festivals taking place during the summer in Edinburgh. Along the years, a book festival, Edinburgh Book Festival has been held here and is currently the largest book festival in the world. Then, there are Military Tattoo which is held at the marvelous Edinburgh Castle and Edinburgh Film Festival. Add a Jazz festival, Edinburgh Mela, Hogmanay, Edinburgh Science Festival and the Children’s Festival and you’ve got the complete list of what’s going on in Edinburgh over the year and why it’s been so popular for the festivals it hosts.

Edinburgh Festival Fringe
This is undoubtedly the world’s largest arts festival. It takes place every August for 3 weeks and is particularly famous for showcasing experimental works which wouldn’t have been admitted at more formal festivals.

In 2010, the Fringe takes place between August 6 and 30 and more details can be found on the festival’s official web site.

Military Tattoo
The annual military parade which takes place at Edinburgh Castle attracts tourists from all over the world. No wonder that tickets sell out in advance. The highlight of the parade is the pipes of drums, provided by the regiments of British Army.

In 2010, the Military Tattoo takes place between August 6 and 28 and more details –as well as tickets – can be found on the official web site.

Edinburgh International Festival
The festival stages annually one of the greatest celebrations of arts attracting public from all over the world. Internationally famous acts gather here to show their latest works.

The 2010 Edinburgh International Festival takes place between August 13 and September 5 and details can be found on the festival’s official web site.

Edinburgh International Book Festival
The largest book festival in the world presents a varied program for adults and children alike. It includes debates, discussions, workshops and readings in the beautiful setting of the Charlotte Square Gardens.

The 2010 edition of the book festival takes place between August 14 and 30 and more details can be found on the festival’s official web site .

Edinburgh International Film Festival
Each year the film shows an amazing range of movie premiers. It’s just perfect for those who enjoy movies. Although until recently it has been held in August, the bold move to organize the festival in June has been taken in order to ensure the festival’s own “identity” and to help make it one of the best international film festivals in the world.

In 2010, the film festivals takes place between June 16 and 27 and more information can be found on the festival’s official web site.

>> While in Edinburgh for the festivals, consider buying an Edinburgh Pass. It will get you into most of the city’s attractions and has some discounts for restaurants and shops too.