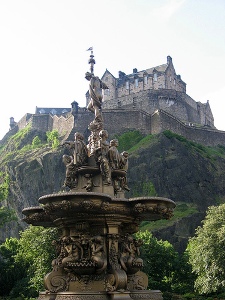 Edinburgh is considered one of the most picturesque cities in Europe because of the Medieval and Gregorian architecture one can admire in the city. Both the Old and New Towns have been declared World Heritage Sites by UNESCO.

How to get to Edinburgh

Waverley Railway Station is the city’s main railway station and is an attraction by itself. Located right in the middle of famous landmarks, there are many trains arriving in Edinburgh from all over UK. There are hourly trains arriving from London (journey takes between 4 and 5 hours).

Edinburgh is well connected by road as well. Several motorways connect the city to the rest of the UK. The journey from London takes about 9 hours and the best route is on the M1 motorway and then the A1.

>> Read more about getting from London to Edinburgh by plane, train or road.

Edinburgh has a temperate maritime climate, quite mild considering its latitude. The temperatures rarely fall below freezing during winter. Because of its geography, though, the city can be quite windy. The coldest months are January and February, while the hottest is July. The best times to visit are between May and September, though other times have the advantage of smaller crowds.

>> For more information, check out our Scotland weather page.

Edinburgh is best enjoyed on foot. The Old and New Town are located within 15 min of each other which makes it really easy to visit everything with just a map in hand.

If you like to do a lot of sightseeing, consider buying the Edinburgh Pass. It costs £24 for a day. It includes free entrance to 30 top attractions, free use of the public transport, a guidebook and discounts at restaurants and shops.

Royal Mile is the colloquial name given to a succession of streets which make up the main road in the Old Town. It runs between Edinburgh Castle and Holyrood Abbey and is about one mile long. It’s the busiest tourist street in the Old Town. Its New Town counterpart is Princes Street.

Musselburgh Old Links is the oldest golf course in the world, and is only a short drive out of Edinburgh’s city centre. Here you can play a course that was six times home to the Open Championship, and that has been in continuous use for centuries.

Edinburgh Castle is the city’s symbol. Standing on top of Castle Rock, the castle is an ancient stronghold and the second most visited landmark in UK. It is among the few ancient fortresses which still house a military garrison although it only has ceremonial purposes. The castle is open all year round and can be visited 9:30 AM to 6 PM between April and October and 9:30 AM to 5 PM between November and March.

Palace of Holyroodhouse was the main residence of Kings and Queens of Scotland since the 15th century, and remains the center of Scottish government. It stands at the bottom of the Royal Mile and can be visited all year round. It’s famous for the art collection it houses.

If you’re a sports fan, Edinburgh has a lot to offer you, including Murrayfield Stadium, home of the Scotland national rugby team, located in the West End, and two top football parks, Easter Road (home of Hibernian FC) and Tynecastle (home of Hearts).

If you fancy seeing some animals, don’t miss visiting Edinburgh Zoo and watch the Penguin Parade. Also, you can visit the Royal Botanic Garden which is home to interesting plants and is a lovely place to spend a sunny day and even go for a picnic.

Edinburgh has a huge variety of places to eat (and of course, drink), and had the distinction of winning the 2010 Scottish Restaurant Awards for both best fine dining and best pub food. So either way, you’re covered.

Climb the Calton Hill for some of the best views of the city. Try to go there either at sunrise or sunset. Don’t forget the camera!

Edinburgh transforms every August, as it hosts some of the biggest and most eclectic festivals in the world, the most famous being Edinburgh Fringe.

Edinburgh has everything from the most luxurious to the simplest accommodations imaginable. Festival season can be a very hard time to find a room anywhere near the city centre, so book early.

>> For more information, check out our guides to Hotels near Edinburgh Airport and 5 star hotels in Edinburgh

Edinburgh has a long history in science and the arts, and it should come as no surprise that some impressive figures in science have come out of Edinburgh, including Alexander Graham Bell and James Hutton, the father of modern geology. More recent Edinburgh natives include Sir Sean Connery, JK Rowling, and former British Prime Minister Tony Blair.