Free Things to Do in Edinburgh 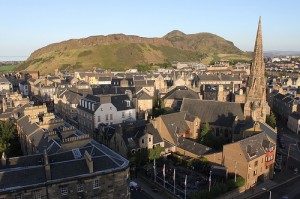 Edinburgh is a fantastic city for tourism, being stuffed full with castles, museums and other attractions. However, for budget travelers, it can be an expensive city, with entry fees to all those places adding up quickly. The Edinburgh Pass is a great way to take in a large number of attractions for a single low price, but there are also plenty of things to do in Scotland’s capital that require not a single pound from your pocket. In fact, some of the best things to do in town cost you nothing at all. Here are just a few free things to do in and around Edinburgh.

Many of Edinburgh’s best museums and galleries are free for visitors, including the National Galleries, the Museum of Scotland, and the Writers Museum, dedicated to famous Scottish authors like Robert Burns and Sir Walter Scott.

The view from the large volcanic hill in the center of Edinburgh is one of the best ways to see and photograh the city as a whole. Situated inside Holyrood Park (a free attraction of its own), the Seat takes about an hour to climb. There are several different paths of varying levels of difficulty, starting with the so-called Tourist Path, the easiest of the routes. If you decide to try for a sunset photograph of the city from the Seat, remember that the way down can be a bit treacherous, especially if it has been raining.

Fishing the Water of Leith

There are more famous rivers to fish in Scotland, but none of them are so easily accessible (or free of charge). Permits to fish on the river are free and available from several offices around the city. The legal season for fishing is 1 April – 30 September, and the main eating fish you can catch here are brown trout. Limit is six trout per rod per day, more than enough to feed yourself on, if you have the skill to catch them. Please be aware that salmon and sea trout must be thrown back.

Edinburgh Fringe is the world’s largest arts festival and certainly not to be missed if you can make it to the capital in August. But Fringe can get pretty pricey, and so a free festival has sprouted up to accompany it. Free Fringe is a series of performances throughout the month, and though it started as a purely comedy festival, it now includes poetry and spoken word, and adds more performances every year. (Official site)

That’s right – I said “beach”. Just three miles from the city is Edinburgh’s local beach resort, Portobello. It’s not going to make any list of the better beaches in Europe, but it is clean, close to the city centre, and free to visit. Be aware that though there might be sand and surf here, this is still Scotland, and the waters are almost always quite cold. Any time of year, winds can get pretty high as well, but there are lovely views of the sea. For parents traveling with kids in tow, the promise of a trip to the beach can be an effective bargain in return for the little ones staying quiet through the less exciting attractions.

A growing trend in European cities in the last decade or so has been the move toward free walking tours, led by locals who work only for tips. These tours are usually about 2-3 hours long and cover the major sights around town, while also giving visitors a chance to interact with a local and hear stories that might not come up if they were traveling alone. Keep in mind that though there is no fee for these tours, the guides depend on tips, and so leaving them nothing for their trouble is pretty rude, especially if they do a good job and you enjoy yourself. But the amount is entirely up to you. Click here for more information from one of the more popular walking tour providers.

Save money on Edinburgh hostels
Another great way to save money on your Edinburgh trip is to book a hostel rather than a hotel room. Many hostels offer private rooms that are still less expensive than a standard hotel room. Use the form below to search for hostels available during the dates of your trip.

Photo credit: Edinburgh and Arthur’s Seat by oosp on Flickr