Germany: One of the World Cup Host Countries 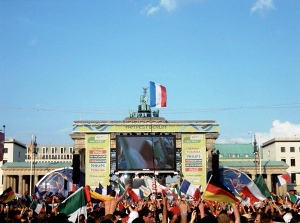 With the World Cup 2010 in full swing, football fans are either glued to the TV sets or planning a vacation to South Africa. If you haven’t managed to score tickets to your favorite team’s games, why not plan to watch the games in other interesting countries, which have a lot of World Cup history.

One of the World Cup host countries is Germany. And in case you need more reasons to visit the country, here are just some of them. Germany hosted the tournament in 1974 and 2006. The national football team won has won three World Cup titles. And the German beer goes great with football, doesn’t it?

Cheap flights to Germany are very easy to find, especially if you are already in Europe. Many low-cost carriers have excellent deals to German cities right in the middle of the high season. For example, Ryanair offers flights from £10 one way between Edinburgh and Hamburg or Frankfurt.

If you plan to stay in Berlin, keep your eyes on the special offers if you want to save money. Otherwise, expect to pay about £132 round trip from Edinburgh or £107 round trip from Glasgow, at the end of June.

Berlin hotels aren’t likely to burn a big whole in your pocket. You can find rooms in 3-star hotels at just £44 per night (2 persons). Alternatively, you can look for hostels in Berlin. Beds in private rooms start at £21 per night.

Now that you’ve figured out the most important purchases for this vacation, it’s time for more fun things. Each large city has set up large screens in parks or squares to allow football fans to watch the games. In Berlin, the place to be is the Fifa Fan Fest 2010. Entrance is free and there are two venues.

Alternatively you can check out the Kulturbrauerei, an old brewery converted for cultural event. In the backyard there is a big screen to watch the matches.