Getting from Edinburgh to Aberdeen 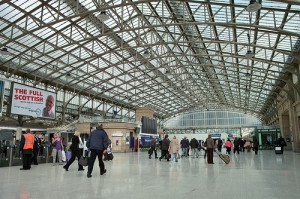 Edinburgh , the capital of Scotland, is a unique city that combines the old with the modern to offer visitors a lot of places to visit and things to do.

Aberdeen , Scotland’s third largest city, is known for its old buildings and lovely parks. It also boasts a busy harbor and a beach.

Although both cities are served by airports, the short distance – 127 miles – between them doesn’t require a flight. Sure, you can fly but only via London, Birmingham or Manchester, which means high fares and a long time spent traveling.

The cheapest way to travel between the two cities is by buses operated by Megabus (£7.00* one way). Train tickets are slightly more expensive but you don’t save much in terms of time spent traveling.

Trains from Edinburgh to Aberdeen

First Scot Rail operates trains daily, every hour between Edinburgh and Aberdeen. The first train departs Edinburgh Waverley at 5:30 a.m. and the last one at 11:09 p.m. The travel time is between 2h 20 min and 2h 45 min. The cheapest standard single fare is £10.90.

Buses from Edinburgh to Aberdeen

City Link also operates daily buses between the two cities. The travel time is 3h 10 min and the standard single fare is £27.30. The super single fare is £13.00. On their site they also list the Megabus and Parks of Hamilton departures but at City Link’s fares.

Driving between Edinburgh and Aberdeen

You can also rent a car and drive the 127 miles between Edinburgh and Aberdeen on A90. The drive time is about 2h 40 min. A more scenic route is via A93 but takes about 3 hours.

Note:* at the time the article was written