Getting from Glasgow to Belfast 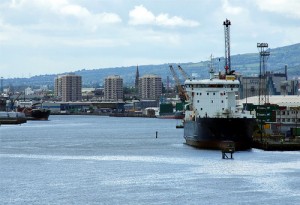 Glasgow is the biggest city in Scotland and offers the best shopping outside of United Kingdom’s capital, London. Located on the banks of the River Clyde, the city is an important economic enter outside of London ad in the past years has become one of the most visited cities in the British Isles.

Belfast is the capital and the largest city in Northern Ireland. Located on the banks of the River Lagan, Belfast is surrounded by hills and is one of the loveliest places to explore on the island. It is still relatively undiscovered, compared to its neighbor Dublin. Don’t miss having a pint in an Irish pub while visiting Belfast.

The easiest way to travel between Glasgow and Belfast is by bus. The bus ticket also includes the ferry crossing. If you are in a hurry , you could also book a flight but do take into account the additional fees (such as booking fee, baggage fee, check in fee, etc) as well as the cost of traveling from the airport to the city center; in which case traveling by plan will be at least twice as expensive as taking the bus.

Glasgow is served by two airports , but only Glasgow International Airport (GLA) handles flights to/from Belfast. The airport is located 8 miles outside the city center and is the second busiest in Scotland. It is base for BMI Regional, EasyJet, Flybe, Loganair, Jet2, Thomas Cook Airlines and Thomson Airways. Flights to Belfast International Airport are operated by EasyJet , while Flybe flies on Belfast City Airport.

Buses from Glasgow to Belfast

Under the Eurolines banner, Ulster bus operates bus services between Glasgow and Belfast. The bus includes the fast ferry Stranraer ticket. There are two departures from Glasgow, at 8:30 a.m. and at 4:20 p.m. The single fare is £26 and the travel time is about 6 hours.

Trains and ferries from Glasgow to Belfast

It is possible to travel by train and ferry between Glasgow and Belfast, following the steps:

1. Glasgow to Troon by First Scot Rail : there are departures every 30 minutes from Glasgow and the travel time is about 40 min. The anytime day singe fare is £6.90.

Driving from Glasgow to Belfast

You can also rent a car and drive from Glasgow to Belfast. Please remember that driving is on the left (so the opposite of what you are used in the United States). The total travel distance is 136 miles on A77 and includes the Belfast to Cairnryan ferry crossing. The total travel time is about 5 hours. Do remember that aside from the price you pay for renting the car, you’ll also pay for using taking the car on the ferry.

Stena Line is one of the companies operating on this route. The economy fare for an adult and an economy car is £104.00 one way.