Getting from Glasgow to Edinburgh 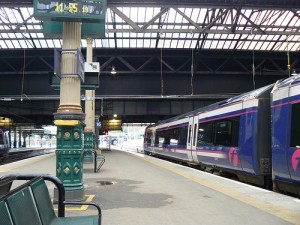 Located on the banks of the River Clyde, Glasgow is the biggest city in Scotland. It is also the third largest city in the United Kingdom and an important economic enter outside of London. Over the past years it has become one of the most visited cities in the British Isles and has the best shopping outside of London.

Edinburgh is the capital of Scotland and a unique city which manages to combine the old with the modern to create a stunning Scottish city, visited by a lot of tourists. Those passionate about history and architecture are blessed when it comes to visit Edinburgh’s superb landmarks.

Although both Glasgow and Edinburgh are served by important airports, the short distance between the cities – 50 miles – doesn’t require anyone to fly.

The cheapest way to get between Glasgow and Edinburgh is by bus. Traveling by train is just as fast but the fare is at least double than the bus fare.

Trains from Glasgow to Edinburgh

Glasgow is served by two railway stations but only Queen Street Station handles shuttle trains to/from Edinburgh. The trains are operated by First Scot Rail . In Edinburgh, the main railway station is Waverley Station and trains from Edinburgh arrive every 5 to 15 minutes during the day and about every 30 minutes in the evening. Depending on when you travel during the day, expect to pay from £7.50 for the cheapest standard single ticket. The travel time is 1 h to 1½ h.

Buses from Glasgow to Edinburgh

City Link operates buses between Glasgow’s Buchanan Bus Station and Edinburgh’s bus station every 8 to 15 minutes during the day. The travel time is 1h 23 min and the super single fare is £4.00. The standard single fare is £6.50.

Megabus also operates buses every 10 to 15 minutes during the day between Glasgow and Edinburgh. The travel time is 1h 13 min to 1h 36 min and the single fare is £3.50.

Driving from Glasgow to Edinburgh

You can also rent a car and drive from Glasgow to Edinburgh but do remember that driving is on the left (so the opposite of what you are used in the United States). On M8, the driving distance is 49 miles and can be covered in about 1 h.