Getting from Glasgow to Inverness 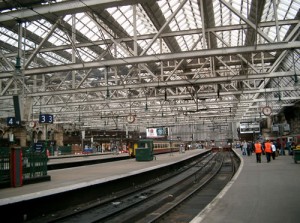 Glasgow , the biggest city in Scotland, is located on the banks of the River Clyde. It is an important economic center in the United Kingdom and one of the most visited cities in the British Isles. Visitors come here for the excellent shopping opportunities and to explore what the city has to offer.

Inverness , the most northerly city in the British Isles , is the gateway into the Scottish Highlands.

Although both cities are served by airports, the short distance between them – 169 miles – does not requite a flight to get between Glasgow and Inverness. Sure, it’s possible to fly by way of Belfast or Manchester, but the fares and time spent traveling does not make flying a worth while option.

The difference between the bus and train fare is so small that it doesn’t really matter which means of transportation you choose between Glasgow and Inverness. And the travel times are about the same, as well.

Trains from Glasgow to Inverness

First Scot Rail operates daily trains, about every 2 hours, between Glasgow Queen Street and Inverness. The travel time is about 3h 15min and the cheapest standard single fare is £10.90. On the way back, the same fares and trains frequency apply.

Buses from Glasgow to Inverness

Megabus and CityLink operate buses on a daily basis between Glasgow and Inverness. There are 8 departures per day, with the first bus departing Glasgow Buchanan Bus Station at 8:30 a.m. and the last at 9:55 p.m. The travel time is between 3h 23 and 3h 40 min. The single fares are either £10.00 on Megaus and City Link or £20.00 on CityLink Gold. Tickets from both operators can be purchased from the Megabus’ website. On the way back, the same fares and bus frequency apply.

Driving from Glasgow to Inverness

You can also rent a car and drive the 169 miles between Glasgow and Inverness. The drive on A9 takes about 3h 15 min, while on A82, although it’s a slightly shorter distance – 167 miles – it takes about 3 ½ h to drive between the two cities.