Getting from Edinburgh to Paris 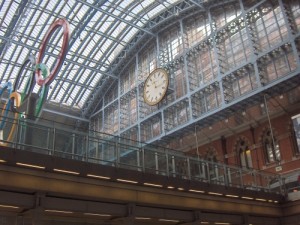 Edinburgh is the capital of Scotland and a very popular among travelers. It is a unique city which manages to combine the old with the modern and offers a lot of places to visit.

Paris is the capital of France, the City of Lights and romance. Whether you travel with your loved one, with the family or with a group of friends, there are plenty of things to do and places to visit in Paris.

If you don’t mind spending quite a bit of time (21 h) traveling, then the cheapest option is the bus. However, during the shoulder season flights start at £17* one way (excluding the various fees and the transfer to the city center) and the travel time is much shorter. The train is the most expensive option.

Edinburgh International Airport (EDI) is the busiest airport in Scotland but doesn’t serve as hub for any airline. Located about 6 miles / 10 km from the city center, the airport handles flights to/from Paris CDG and Paris Beauvais.

Paris is served by three airports, but only two of them handle direct flights to/from Edinburgh:

It is cheaper based on the base airfare to fly from Edinburgh to Beauvais on Ryanair – with rates starting at £17 one way in mid March 2012 – but you should consider the cost of getting to Paris from the airport, as well. In that light, the £32 one way fare on EasyJet from Edinburgh to Paris CDG is not too high, either. Should you plan to travel in mid June 2012, expect to pay from £42 one way if you fly on Beauvais and £50 one way if you fly on Paris CDG.

Buses from Edinburgh to Paris

Eurolines operates buses between Edinburgh and Paris (Gallieni). There are two departures from Edinburgh but bothrequire a change in London. Buses depart Edinburgh at 9:45 a.m. and 10 p.m. The travel time is 21 h and the single fare starts at £37.

Trains from Edinburgh to Paris

You can travel from Edinburgh to Paris by train, following the steps:

1. Edinburgh Waverley to London Kings Cross by First Scot Rail : trains run every ½ h from Edinburgh starting at 5:40 a.m. The travel time is 4 ½ h to 4h 45 min and the cheapest standard single fare starts at £60.50.

2. London St. Pancras International to Paris by Eurostar : St Pancras Intl is located in the same place as Kings Cross train station, but you need to walk between them (follow the signs). There are trains departing every half hour, daily from London and the travel time is 2h 16 min. The cheapest single fare is £73.00.

Driving from Edinburgh to Paris

You can also rent a car in Edinburgh and drive the 650 miles to Paris. However, do remember that you’ll be crossing a border, so ask the rental company if you are allowed to. And you’ll change from driving on the left (in the United Kingdom) to driving on the right (in France). If you choose the A16 route (the shortest), the ferry crossing is Dover to Boulogne-sur-Mer . The total travel time is 12 h 15 min and includes the ferry crossing. Please note that aside for paying for the rental car , you also need to pay for the ferry crossing (passenger and car).

Note: * at the time the article was written

London Kings Cross by Cristina Puscas and may not be used without permission.