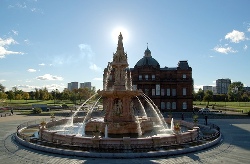 Although a large city, Glasgow has a surprising number of parks and more than anywhere else in Scotland (and UK for that matter). Two of the most popular parks in Glasgow are: Glasgow Green and Kelvingrove Park.

It’s the most popular and important public park and venue for concerts and open air events in Glasgow.

The easiest way is to walk from either Bridgeton or Argyle Street railway stations. There is limited parking available –and the cars parked illegally are all towed away – and the area is notorious for car crime. So definitely, choose to walk here.

Among the most important landmarks in the park we can list:

Located in the West End, it’s a very popular park among the students from the nearby University. The park contains a skate park, bowling and croquet greens as well as a bandstand. The park is also very popular among joggers.

The most important landmark in the park is Kelvingrove Art Gallery and Museum, which is the most popular free attraction in Glasgow. It contains one of the finest collections of arms and armors in the world, as well as a vast natural history collection.

If you like to cycle, there is a cycle route – called Clyde walkway – which runs from City Centre to Strathclyde Park.