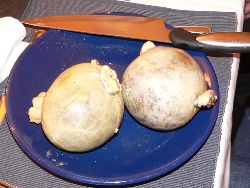 Let’s be honest for a second: Scotland is not exactly known for its delish cuisine. And you wouldn’t exactly place Scotland on the “bizarre” foods map either. Most Scottish food is relatively simple, hearty and very tasty. The one most famous food in Scotland, though, tends to evoke both very positive and very negative reviews, and that is haggis.

What is haggis?
Although there aren’t any evidences of its origins, haggis is thought to have been first made by the Ancient Romans living in Scotland.

There are many recipes for haggis but in general, all contain: sheep’s “pluck” – that’s heart, lungs and liver – minced, combined with minced onions, spices, salt, oatmeal, suet, some stock. The mixture is then put in the sheep’s stomach and boiled for about 3 hours.

Lately however, the mixture is boiled in casing rather than the stomach and there are even varieties for the vegetarians.

Traditionally, haggis is served with “neeps and tatties”, which is yellow turnip and potatoes mashed separately. Of course, it’s not uncommon for it to be served in the company of whisky.

Andrew Zimmern, the host of “Bizarre Foods” probably described it best “born of necessity, as a way to utilize the least expensive cuts of meat and the innards as well”, but those that travel to Scotland and don’t try it because of the ingredient list are missing out, because it’s actually quite good.

When is haggis eaten?
Traditionally, haggis is served with the Burns supper on the week of January 25, when Scotland’s national poet, Robert Burns, is commemorated. Burns even wrote a famous poem about haggis, which is often read at Burns suppers as the haggis is served. It is also often eaten on Hogmanay, Scottish New Year.

Dishes with Haggis
You’ll find haggis all over the super markets in Scotland (and England). In fast food restaurants it’s served deep fried in batter (for the health nuts) and accompanied with chips. The combination makes “Haggis supper”. You’ll also find a “Haggis burger” which is fried haggis served on a bun. A modern dish based on haggis is the “Flying Scotsman” which is chicken stuffed with haggis. 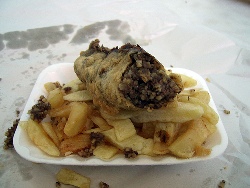 Make your own haggis

Dare to try this dish? If so, you need:

Boil the liver, then parboil the onion and mince them together. Brown the oatmeal and add it to the liver and onion mixture. Fill the pluck with the mixture. Make sure to remove all air and then sew up. Prick the haggis in different parts so it does not burst – yes, it’s been known to “explode”! Place it in boiling water and boil for 4-5 hours.

Did you know? The import of Haggis to the USA is illegal because of its ingredients (mainly sheep’s lung).