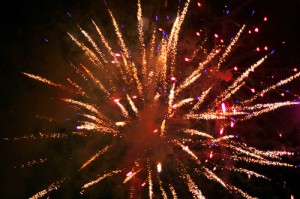 Some sort of celebration to mark the end of one year and beginning of the next is nearly universal in cultures around the world, even if the date of the New Year is not. But there are few places with a longer history of New Year’s traditions than Scotland, where the holiday is known as Hogmanay (pronounced “hahg-mun-AY”). Until recently in Scotland, New Years was actually a bigger holiday than Christmas. Hogmanay has old pagan roots, and many of the old customs went out with the introduction of Christianity to Scotland, but here are a few that have survived to this day.

It was once believed, and still is by many traditional Scots, that the first person to set foot in a house after New Years sets the mood for that entire year. From this belief came the custom of “first-footing”, which involves walking into a friend’s home just after midnight on New Year’s day with a gift to help bless the house for the coming year. In the past, the gift was often coal, salt or biscuits. Today, a biscuit is still quite welcome, but many guests bring a bottle of whisky instead.

Throughout the English-speaking world, the sound most associated with New Year’s celebrations is the singing of Auld Lang Syne. The lyrics were written by the great Scottish poet, Robert Burns, in 1788, but the tune is a traditional song from much earlier. Though it is sung by millions every New Years, few would recognize the original Scots-language version, one verse of which goes:

We twa hae run about the braes,
And pu’d the gowans fine ;
But we’ve wander’d mony a weary foot,
Sin auld lang syne.

They may sing Auld Lang Syne in New York and London, but those cities stop short of adopting another Scottish custom for New Years. In Stonehaven, a small town in northeast Scotland, townsfolk have spent at least the past 100 Hogmanays making balls of wire and tar, lighting them on fire and swinging them by a chain. Like a nighttime version of the Highland Games, the event is a test of strength, with the winner being the one that can swing the fireball around their head for the longest time without stopping. Let’s see them try that in Times Square.

Scots may have some odd traditions surrounding Hogmanay, but like anywhere, it is also the biggest party night of the year. From parties with traditional music and dance, called cèilidh (“KAY-lee”), to massive festivals in each of the major cities, it’s the one night that nearly everyone does something special. Edinburgh holds the biggest public event, with over 100,000 revelers filling Princes Street and the Royal Mile. In Glasgow, always trying to out-do the capital city, Hogmanay is only one night of a three-week festival called Winterfest.

Wherever you find yourself in Scotland, small town or big city, you can be sure to find plenty to do on New Years, and the legendary hospitality of the Scots only becomes warmer over the holidays. If you actually are planning on being in the country for Hogmanay, check out the official Edinburgh Hogmanay site for all the best spots to raise a glass.