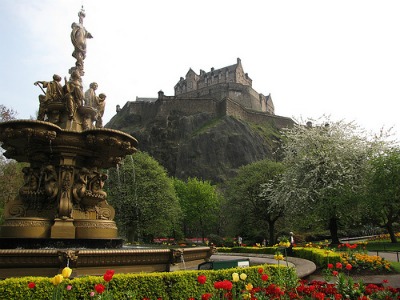 While there are plenty of castles around Edinburgh, the main one people want to see – and be close to when they’re picking a hotel – is Edinburgh Castle. Sitting on a hill in the center of the old city, it’s impossible to miss – and when you’re not familiar with a city, choosing a hotel near a major landmark like that is a great way to know that you’re going to be in the middle of the action.

There are several hotels and hostels near Edinburgh Castle, but of course they don’t always come cheap – this is, after all, where most people want to be when they visit the city. There are cheaper hotels in Edinburgh that aren’t so far away from the castle that you couldn’t still walk there (or even take the bus), so if you’re hoping to save money that might be an option for you.

Also note that two of the 5-star hotels in Edinburgh featured on WhyGo Scotland, the Sheraton Grand Hotel & Spa and Caledonian Hilton Hotel, are also very close to the Edinburgh Castle.

The Point Hotel Edinburgh is on the back side of the castle, but you couldn’t ask for a better castle view – especially from the roof terrace. Not all of the rooms have a view of the castle, but of course you’re a very short walk from the castle itself if you stay here. There’s an on-site restaurant and bar, and it’s also got conference rooms for business travelers.

Also on the back side of the castle (a bit further from the castle than the Point Hotel) lies the Best Western Edinburgh City Hotel. There are 52 rooms in the hotel, and it caters to business travelers as well as leisure travelers with things like free WiFi and conference rooms. There’s also an on-site restaurant.

For a less typical hotel experience, the Tigerlily boutique 4-star hotel is a great option. It’s located on George Street across Princes Street Gardens from the castle itself, but it’s still a short walk – and this stylish little hotel will certainly appeal to those of you who appreciate more unique accommodation. There are more than 30 rooms at Tigerlily, an award-winning on-site restaurant, and a lovely bar.

Not far from Tigerlily is the Castleview Guest House, a 3-star guest house in a restored Georgian building. Along with standard single and double rooms, Castleview also has larger family-style rooms that sleep up to six people. Not all rooms have a view of the castle, so if that’s important be sure to ask for that – and note that the dining room, which everyone gets to use, does have castle views. This is a small property, so if it appeals to you don’t wait too long to book.

The Old Waverley Hotel is located at the end of Princes Street Gardens opposite the castle, but that means it’s in a good position to have views over both the park and the castle. It’s a B&B-style hotel, and many of the bedrooms have castle views. The restaurant also overlooks the park and Princes Street below.

On a tight budget but still want to be close to the castle? Check out these hostels right in the neighborhood.

The Budget Backpackers hostel is a street behind the Castle Rock Hostel, so it’s also extremely close to the castle. This, too, is a hostel that’s been voted among the top in Scotland in the past, and it has both private and dorm-style rooms as well as the usual hostel amenities.

The Caledonian Backpackers hostel is at the end of Princes Street Garden that’s closer to the castle, on the opposite end from High Street just off Princes Street in the New Town. There are female-only dorms in addition to the usual co-ed dorms, and this hostel also has the usual amenities you’d expect.