Listening to Bagpipes in Scotland 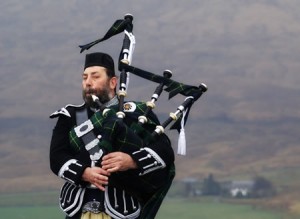 There are a few things that immediately spring to mind when one thinks of Scotland. The sight of the rolling green landscapes of the Highlands. The taste of peaty goodness in a glass of whisky. But as far as sounds, you would be hard-pressed to think of one more Scottish than that of a bagpipe. It’s true that there are bagpipers in Ireland too, and in fact the instrument is more widespread throughout Europe than many people realize, but no other place can claim such a close association with this strange and lovely instrument.

History of the Bagpipe

The origins of the bagpipe are a bit hazy. One of the first mentions of bagpipes being called by that name is in Chaucer’s The Canterbury Tales, written in the late 1300’s, but there is some evidence that the instrument is much, much older. Several accounts tell of the Roman Emperor Nero playing an instrument that is described as being similar to a bagpipe, but how similar we’ll probably never know. The oldest example of a similar instrument was found in Egypt, dated to 1500 BC.

One problem with discerning the early history of bagpipes stems from the fact that the instruments themselves don’t tend to last very long. Made entirely of fairly frail organic materials, they are hard to preserve and maintain.

Almost from the beginning of their history, bagpipes had a close association with the military. Roman forces were often accompanied by pipers, and in fact were probably the force most directly responsible for spreading bagpipes around Europe, and eventually to Britain. Today, many militaries around the world, as well as police forces, use bagpipes in their ceremonies. Both inside and outside of the military, the pipes have also become very common instruments at funerals, and it is more difficult to think of a more poignant sound than that of a lone piper playing for a crowd of silent attendants as a body is laid to rest.

In the Middle Ages, the bagpipe was arguably the most popular instrument in Europe, and probably arrived in Scotland around 1300. So as much as we would love to claim the bagpipe as a Scottish invention, it actually came to Scotland fairly recently in its long history. But only in Scotland has it become such a part of the local culture. For centuries, many Scottish towns have had official pipers, paid by local taxes, to play at all town events. When the Calvinist Reformation came to lowland Scotland, the pipes moved into the Highlands. Even there, the instrument’s survival was not assured, though. In 1746, after the Battle of Culloden, pipes were outlawed, technically as a weapon of war, but really as a way of punishing the defeated Highland Scots. But the pipes lived on, and have never lost their strong association with the Highlands and with Scotland as a whole.

Where to hear pipers in Scotland

There are bagpipers everywhere in Scotland, but even though some modern bands still use pipers, your best bet at hearing a great piper perform is to seek out one of the many traditional music festivals throughout Scotland, or, even better, a festival devoted entirely to the pipes. There are local festivals all year, but most of the big ones are concentrated in late summer and early fall. Some of the bagpipe-heavy events on Scotland’s calendar are:

>> For more information on upcoming events around Scotland, check out our 2010 Scotland events calendar

After all, this article isn’t called “Reading about bagpipes in Scotland”. Here’s a sample of the glorious Scottish bagpipe in action.

Some of the songs you are most likely to hear from a Scottish piper include: