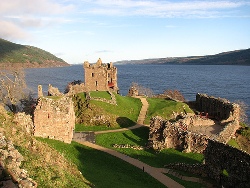 Home to the Loch Ness monster, Loch Ness is probably the world’s most famous lake and definitely Scotland’s most well-known loch. A huge part of the tourism industry of Inverness, and in fact the Highlands in general, is due to good old Nessie, and the mysterious waters of Loch Ness. It may not be the largest Scottish loch (that would be Lomond), but it is the one with the most water volume, thanks to its unusually deep bottom.

Loch Ness runs along the natural geological cleft which stretches between Fort William in the west of the Scottish Highlands and Inverness in the north. This feature is known as the Great Glen Fault.

How to get to Loch Ness

Nearly all of the visitors to Loch Ness come here from Inverness, but tours from most of Scotland’s major cities of course include the most famous loch.

The Loch Ness Monster, or Nessie, is of course the famous aspect of the loch. Despite decades of sworn reports from dozens of witnesses (reliable and otherwise), proof of the legendary creature has proven elusive. But that doesn’t stop monster hunters from all over the world from coming and watching the waters for something to emerge.

While a certain kind of traveler is drawn to Loch Ness for the legendary monster, some travelers have a tendency to dismiss the loch as a tourist trap and nothing more. But there is a lot to do on and around Loch Ness, and the area is rich in history and natural beauty.

The most famous structure along the loch is Urquhart Castle. The castle is in ruins but there are still distinguishable walls, turrets and keep. It also offers some of the best views of the loch, and any decent tour of Loch Ness will include a stop here. Above the castle is a visitors center with a shop and an even more majestic view of the area.

Loch Ness is also a popular hiking spot. The Great Glen Way, a 73-mile trail between Inverness and Fort William, runs along the length of the loch.

There are several small towns along the length of Loch Ness, the most notable of which are Drumnadrochit and Fort Augustus. For those wanting to stay the night nice and close to Nessie’s Loch, there are several good accommodations in both of these towns. The Drumnadrochit Hotel is a fine choice, and starts around £30 per night.

At the top of this map, you can see Inverness, and the River Ness leading down to the loch. Urquhart Castle is shown with the red star on the northern shore.

Driving along A82, which runs along the western bank of Loch Ness, offers some of the best views in Scotland all along its route.

>> Don’t know your lochs from your bens? Check out my guide to Scottish place names and their meanings