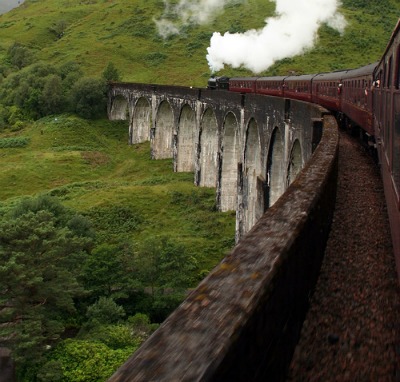 There is, now, a whole generation for whom the words “Scotland” and “train” will conjure up but one image – the beautiful arched bridge that carries the Hogwarts Express in the Harry Potter films. While many of the scenes in those movies are made of studio magic, the backdrop of Scotland is very much real – and that rail bridge exists in northwestern Scotland.

The Glenfinnan Viaduct, built in the late 19th century, is part of the West Highland Line in Scotland – which happens to be home to some of the most scenic train rides in the world. The Royal Scotsman company offers several train tours through Scotland, ranging from 2-7 days in length and covering various parts of the country. Not every route includes the famous Glenfinnan Viaduct, so if that’s high on your must-see list then be sure to target the routes that go through the western and northwestern parts of the country. Read through each route to make sure it’s on the itinerary.

The Royal Scotsman is one of the world’s great luxury train lines (it won’t surprise you to learn that it’s part of the Orient Express company), so these holidays don’t come cheap. They’re an excellent vacation idea for train enthusiasts, however, especially when you consider that the cost includes everything from transportation to food to lodging to off-train excursions. And of course the scenery outside your train window is worth every penny.

To join a train trip on The Royal Scotsman, you’ll first need to get yourself to Edinburgh. All of the company’s trips depart from this beautiful city, and if you’ve never visited before this is also a good opportunity to find out what all the fuss is about. You may find better deals if you fly first into London and then fly into Edinburgh on a budget carrier (rather than directly into Edinburgh), so be sure to check on that option.

Also note that if you’re planning to spend a few days in the city before or after your train trip, there are two “sides” to the city center. There’s a much newer downtown area, and then the historic center around the Royal Mile. The latter is where most visitors usually want to be, but it can be harder (especially in the high season) to find a good deal on a hotel in Edinburgh‘s historic area. Consider staying in a B&B in a nearby residential neighborhood, or – if you’re looking at the more modern part of the city center – look at hotels that are close to bus lines for easy access to anywhere you’d like to go.