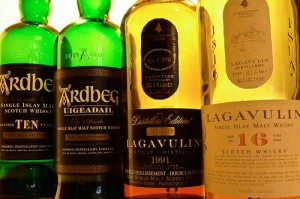 Scotland is known for many things: her friendly people, her lovely green landscapes, and of course, the finest whisky known to mankind. Scotch whisky is referred to elsewhere in the world as simply “Scotch”, but here in Scotland, it’s the other way around – it’s just called “whisky”, because it’s so good that it might as well be the only kind.

No one knows exactly when Scots began distilling whisky, but it has certainly been an evolving art and business for many centuries. The ancient Celts called it Uisge beatha, literally translated as “the water of life”, a sign that the Scottish passion for whisky is nothing new. Today, over 100 large distilleries and countless small personal or family ones can be found throughout the country, and while you’re in Scotland, you’re never far from Scotch being made. Each town or village’s brand has its own unique flavor, a product of the grain, the wood of the casks used for its storage, and the qualities of the local water. As with wine, there is almost endless variety and complexity to explore for the whisky enthusiast.

Some of the most famous brands of Scotch whisky include:

– One of the best-selling brands of whisky, especially abroad, this classic is brewed in the Speyside region of northeastern Scotland.

– Another Speyside brand, Glenfiddich has been producing quality whisky since Christmas Day, 1887.

– The only distiller located on the Isle of Skye. Because of its remote location, Talisker tastes much different from other Scotches, its taste often described as “spicy” or “fiery”.

– One of the most famous Highland Scotches, Oban hails from a small town of the same name along the lovely Firth of Lorn, on Scotland’s west coast.

Most of the larger distilleries, including the four listed above, give regular guided tours, and no Scotland vacation is complete without taking a distillery tour and seeing how Scotch is made. Of course, all of the tours include a tasting, and after learning about all of the work that goes into making it, you’ll appreciate the complex taste of the whisky that much more.

If you’re wondering why the word “whisky” is sometimes spelled with an “e” and sometimes not, you’re not alone. True Scotch whisky will always have the word “whisky”, not “whiskey” on the label, as this is the traditional Scottish spelling. But it takes more than a missing letter to qualify a whisky to be called “Scotch”. It must be distilled and aged within Scotland, and must age for at least three years and a day. The age of a whisky is often associated with its rarity and price, and most of the finer brands are not even sold at an age of less than ten years.

>> If you’re a bit daunted by pronouncing your favorite whisky, or just want to learn how to say “cheers” in Scotland, check out our guide to pronouncing Scotch whisky brands.