The Only Nude Beach in Scotland

For most travelers planning a trip to Scotland, there are about a thousand things that come to mind before nude beaches. After all, Scotland isn’t the warmest spot in Europe, and (kilts aside) is usually thought of as a destination where more layers of clothing are needed, not less. But as I always say, there is something for everyone in Scotland if you look hard enough, and I mean everyone. As evidence, I present to you Scotland’s only official nude beach – Cleat’s Shore.

>> For anyone considering a wee skinny dip at Cleat’s, I’d recommend a quick look at our Scotland weather page. If you’re still up for it, then read on, and good on you! 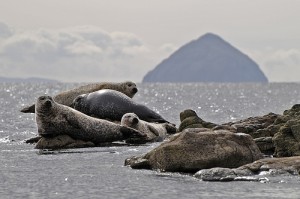 It shouldn’t surprise you that there are a few differences between Cleat’s Shore and your average nude beach. Firstly, if your interest in naturism comes mainly from the eagerness to see other people naked, you should be aware that Cleat’s is very often empty. Nick Mayhew, author of the definitive guide to British naturalism “Bare Britain” (proving there is, in fact, a book about everything) calls it “probably the least visited nudist beach in the known universe”. For those looking for a place to commune with nature without the barrier of clothes, it can be an ideal place for this same reason – no crowds, and often, no other people at all. You are far more likely to meet up with seals (pictured), which are commonly found throughout the area, than any fellow humans.

One more warning – for anyone who might want to test whether Cleat’s is really the only nude beach in Scotland by dropping their trunks at one of Scotland’s more accessible or populated beaches, be aware. The law in Scotland is a little vague, and open to local officials’ interpretation. Basically, being nude on the beach isn’t in itself illegal. But if your nudity manages to “alarm, harass, or distress” others, you can be arrested for breach of the peace. Most police will just tell you to cover up and leave it at that, but don’t take that for granted. Maybe more importantly, the locals might not appreciate seeing your various bits and pieces on their weekend trip to the shore. If you really want to try it, it’s always best to ask around to see if people would be offended.

Cleat’s Shore is located on the Isle of Arran, about 50km southwest of Glasgow in the Firth of Clyde. To get there from the city, take the A737 west to the port of Ardrossan. From there, you can take a ferry (about 50 minutes one-way) across the Firth, landing in Brodick, the main port on Arran. The A841 is the main road that circles Arran. Whether you’re here for Cleat’s shore or not, this is a lovely drive with great views of both the island and the ocean. Take it south from Brodick, around to the southwestern side of the island, to a town called Lagg. Just west of Lagg, you should see signs for Cleat’s Shore Mile.