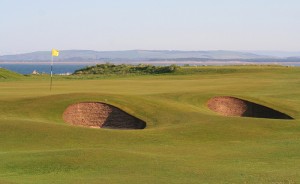 It is a well-known fact that among the many contributions Scotland has made to the world, the Scots invented the game of golf, so it is fitting and not too surprising that the oldest playing golf course in the world can be found here, just outside of Edinburgh. It is called Musselburgh Old Links, and it has been in nearly continuous use for over 300 years.

Records that far back are a little spotty, but we know for sure that Musselburgh was a full course as early as 1672, when a rather meticulous lawyer named Sir John Foulis left a note in his journals about losing his match there. There is also an old story about none other than Mary, Queen of Scots, playing here almost a century earlier, in 1568, but it cannot be confirmed. In any case, no other golf course in operation today has records reaching back so far.

It might seem like an obvious thing to say, but Musselburgh is a quite old-fashioned course, and might be a bit of a surprise to the globe-trotting golfing tourist. If you are looking for a full day on the links, you might want to play twice, since the full course is only nine holes. This also allows you to try out one of the unique opportunities of playing at the Old Links. Rent or buy an old-fashioned hickory club and play the course the way it was played hundreds of years ago, then play it again with your modern clubs to see how much our technology really helps us on the course.

Musselburgh is just a short drive down the road from Edinburgh proper. To drive there from the city centre, just jump on the A1 headed east to the A199, which should put you in sight of the coast. Follow the coastline east for about 3 miles through the village of Musselburgh. There is also a bus service to the course, and a train station in Musselburgh, though you’ll need a taxi from there, especially if you’re carrying clubs.

If you want to stay nice and close to the links, and out of the hustle and bustle of the capital, the closest hotel is the Premier Inn Edinburgh-Inveresk, not more than a kilometer from the first tee. (Book now). However, if you want to spend significantly less and don’t mind the short drive from Edinburgh, we recommend the Kaimes Guest House (Book now) on the southern side of the city. Golfers looking for luxury accommodations in the city should also check out our guide to the 5 star hotels of Edinburgh.

As you’d might imagine, being the oldest golf course in the world, situated near the capital of a mecca for golf like Scotland, Musselburgh gets its fair share of tourist players. If you want to be sure you’ll get a place, reserve your tee time by calling 0131 665 5438 or emailing the clubhouse at info [at] musselburgholdlinks.co.uk.