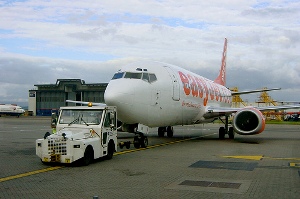 With Edinburgh and Glasgow receiving international flights from North America, the Caribbean and the rest of Europe, Scotland continues to gain popularity among tourists. Train travel can be an excellent option, especially if you want to see the landscape rolling by. And if you plan to do a lot of exploring and don’t want to relay on the schedules, consider renting a car.

When arriving or departing Scotland, travelers typically use Edinburgh International Airport or one of the two airports in Glasgow.

Edinburgh International Airport is Scotland’s busiest airport, located about 10 miles from the city center. It offers a wide range of flights to/from Europe and North America. Still, most international travelers arrive through a direct flight to London, followed by a low-cost flight into Edinburgh.

Glasgow is served by two airports, out of which Glasgow International Airport is the second busiest in Scotland. Located 14 km from the city center, it receives flights both from Europe and North America. Many travelers arrive here by way of a direct flight to London, followed by a low-cost flight into Glasgow

From the Airport to the City Center

In Edinburgh, there’s a dedicated airport bus service, Airlink Express (service 100) which runs from outside the terminal building to Edinburgh city centre at least every 10 minutes during the day and every 30 minutes during the night. Adult fares are £3.50 for a single. The journey takes about 20 minutes. The cheaper alternative is the Lothian Bus (service 35) which runs from the bus stance outside the arrivals building to Ocean Terminal. Adult fares are £1.20 a single. Of course, you can always rent a car directly at the airport.

In Glasgow, from/to Glasgow International Airport, you can take the Glasgow Shuttle which runs from outside the terminal building to the city centre. Adult fares are £4.50 for a single. Another option is the First 747 bus (it’s slower and the adult fares are £4 for a single). The slowest option is the local bus 66. Adult fares are £2.75 for a single and are also valid on the train to Glasgow Central. To get from/to Glasgow Prestwick International Airport, you can use their own railway station. There are two trains per hour to Glasgow Central (show the flight documents and the ticket is £3.20 for a single). During the day you can also take the X77 bus. It covers the transfer when the trains aren’t running.

From One City to Another

In Scotland, just like in the rest of the UK, driving is on the left hand side of the road. Holders of overseas are allowed to drive in Scotland for up to 12 months. The maximum speed limits are: 70 mph/ 112 kph on motorways and dual carriageways, 30 mph/ 48 kph in build-up areas and 60 mph/ 96 kph outside build-up areas. It takes about an hour to get from Edinburgh to Glasgow by car and about 3 hours to get to Aberdeen.

Bus and coach services are the cheapest way to get around Scotland. But they take longest and aren’t the most comfortable. The main operator is National Express. 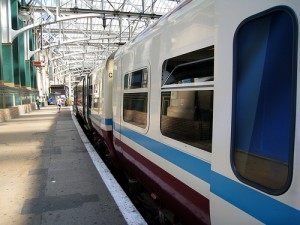 There are five operators linking Scotland to England. Edinburgh’s Waverley Station is a main hub for the Scottish rail network. There’s an hourly service to Dundee and Aberdeen , and two hourly service to Inverness. Shuttle trains to Glasgow run every 15 minutes (through the day) and every 30 minutes (evenings and Sundays).

Due to the relative small travel distances within Scotland, there aren’t many flights linking the Scottish cities. But if you are really in a hurry, you’ll be able to fly between larger cities.

Walking and Cycling in the Cities

In Edinburgh, walk along the Water of Leith, a small river that passes through the city offering a peaceful alternative to the hustle and bustle of the city. Of course, it’s also a pleasure to walk within the Old Town and New Town. Also, the central area of Glasgow can be easily tackled on foot. Aberdeen is also easily negotiated on foot and there are maps available even on line. Due to the traffic is pretty dangerous to cycle in the city but you can ride a bike from Aberdeen city centre to Peterculter along the Old Deeside Railway line. 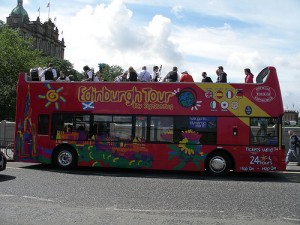 Edinburgh has two main bus companies: Lothian and First. They share the same bus stops but the route numbers and tickets are not interchangeable and they operate different fare structures. Edinburgh Coach Lines serve the National Gallery of Modern Art and the Dean Gallery. There are also four companies operating sightseeing tours.

Glasgow’s public service is one of the most extensive in the UK, outside of London. The subway runs in a double circle around the Glasgow city centre and some inner suburbs. Buses go everywhere in the city. First Glasgow is the main operator. The adult fare is £3.50 for a single.

Aberdeen has a fairly decent bus network, with two operators: First and Stagecoach. In Inverness you can choose among Stagecoach Inverness and Rapsons Highland.