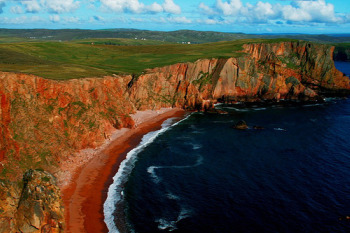 An article appeared recently on WhyGo Scotland’s parent site, BootsnAll, extolling the virtues of the Shetland Islands and encouraging visitors in Europe to add the islands to their itinerary. The pictures are lovely and the author – a Shetlands native – is passionate about his home. But the reality is that most travelers in Europe stick to the big guns like France and Italy. The majority don’t make much time for Scotland, let alone for islands that are a long ferry ride away even further north.

But for those who do choose to spend their holidays in Scotland, that article about the Shetland Islands is a good reminder that this country is much more than just Edinburgh, golf, and whisky. (Although, to be fair, that’s a good start.)

If you’re already planning a trip to Scotland and are looking for ways to include some things that are a little out of the ordinary, a stop on the Shetland Islands is an excellent way to do that. You might look at a map and think the Orkneys are far off the beaten path, but look further north and there are the Shetlands. Consequently, it’s something of an endeavor to reach the Shetlands – making them the ideal place to escape tourist crowds.

You can take a ferry from the Scottish mainland up to the Shetlands, but that’s a 14-hour journey. If this is your choice for getting there, your best option is probably to go from Aberdeen, which is a direct trip all the way up to the Shetlands (nice if you’re going overnight and don’t want to change ferries midway). And although most people coming from overseas fly into Glasgow or Edinburgh first, you can also find flights to Aberdeen from many major cities outside Scotland and certainly from airports within Scotland. You might like boats and water, but that’s still a long time on potentially rough seas. So alternately, there’s an airport (albeit a small one) on the Shetlands with regular flights from Scotland’s major cities, including Glasgow and Edinburgh.

For islands as remote as the Shetlands you might not expect much in the way of accommodation options, but the islands’ largest town has roughly 7,000 people in it – and that town, Lerwick, is also where you’ll find most of your choices for accommodation. As is the case elsewhere in the country, the number of hotels in Scotland are sometimes equalled by the number of B&Bs – so don’t be tempted to turn away from anything that doesn’t have the words “hotel” or “inn” in its name or you could be missing out on some incredible Scottish hospitality.