There are four recognized long-distance walking trails in Scotland, and they criss-cross the country pretty evenly, allowing access to Scottish wilderness for those of us who prefer our transportation without wheels. Stretching 95 miles from outside of Glasgow to Fort Williams, the West Highland Way (WHW) is perhaps the most picturesque of the big four trails, and provides the unique opportunity to literally walk your way into the Highlands.

Travelers do the length of the path in anything from 6 to 10 days, depending on the desired speed and fitness level. I’ve worked out a 7-day itinerary that I think is fast enough to be challenging, but slow enough to allow you to take in the sights and enjoy everything along the way. There are a lot of options for places to stay along the route, so I have listed a recommendation for each overnight stop.

My 7-day itinerary for the West Highland Way is shown here. Each stop marked with a red star. See the full itinerary below the map for details on each leg of the trip.

(12 miles / 19.2 km)
Get started early with a train ride from Glasgow to the northwestern suburb of Milngavie, the head of the trail. The Way starts out flat and easy, with no major climbs in the first day. About halfway through you’ll find the town of Carbeth, which can be an emergency stop if you have any early problems. Just after Carbeth, you will pass a set of prehistoric standing stones, remnants of the first inhabitants of Scotland. If you have time, it’s worth a stop at Glengoyne Distillery, for a dram of whisky before you continue on to Drymen. Other attractions on your first day include passes by two small lochs (Carbeth and Craigallian).
Recommended Lodging in Drymen: The Cottage at Drymen (Official site)

(15 miles / 24 km)
After leaving Drymen, you immediately enter Garadhban Forest, and then there are two possible routes, one over the top of Conic Hill, the Way’s first real hill climb, and the other taking a lowland route around it. For those of you hiking with dogs, there are restrictions for part of this leg of the route during the lambing season. Besides, the views of Loch Lomond are pretty spectacular. After the hill, you will reach the mid-day stopping point town of Balmaha. The rest of the day is spent walking along the shore of Loch Lomond, until you reach Rowardennan.
Recommended Lodging in Rowardennan: The Rowardennan Hotel (Book now)

(14 miles / 22.5km)
The Way divides again just after leaving Rowardennan, but this time, it’s the lower of the two routes that is the more interesting one. Taking that one, you pass by Rob Roy’s Prison, a cave where the famous Scot reputedly once held a prisoner during his conflicts with the Duke of Montrose. Birdwatchers should take a short side trip to the Royal Society for the Protection of Birds reserve. Make sure you leave plenty of time for the remaining hike though, because after the midway point at Inversnaid comes one of the rougher parts of the trail, but also one of the prettiest. Before reaching Inverarnan, you get a great view of three mountains, Ben Lui, Ben Oss and Ben Dubhcraig.
Recommended Lodging in Inverarnan: The Drovers Inn (Official Site) 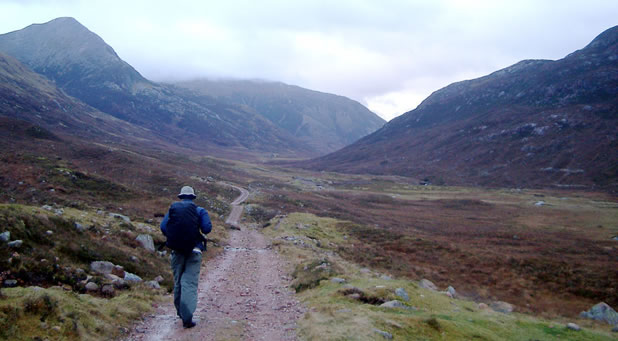 Day 4: Inverarnan to Bridge of Orchy

(19 miles / 30.4km)
On this itinerary, this is the longest day, and you will want to make sure to leave Inverarnan early. Early in the day, you will pass two waterfalls, the Gray Mare’s Tail and the Falls of Falloch. Pass through the town of Crianlarich and over the Kirkton Bridge to reach the 14th century chapel at St. Fillans. Tyndrum is the most natural mid-day stopping point, and after that, it is about 7 miles of lovely mountain views (but pretty flat walking) to Bridge of Orchy.
Recommended Lodging in Bridge of Orchy: Bridge of Orchy Hotel (Book now)

Day 5: Bridge of Orchy to Kingshouse

(12 miles / 19.2 km)
Just after the start of your day, you will want to take a short detour to climb a small hill just off of the trail, which gives great views of the surrounding wilderness. It is not a terribly difficult day of walking, but it is exposed, with very little tree cover, so it can be a slow one in bad weather. The Rannoch Moor is one of Britain’s wildest areas, and photographic opportunities abound. Be aware that if you wander far from the trail here, you could find yourself half-sunk in a peat bog.
Recommended Lodging in Kingshouse (Glencoe): Kings House Hotel (Book now)

(9 miles / 14.4 km)
This stage of the Way is short, but can be difficult, especially in bad weather. The highest point on the Way, called The Devil’s Staircase, is achieved early in the day. Like any high point on the trail, the views can be stunning. The trail then descends into Kinlochleven.
Recommended Lodging in Kinlochleven: Edencoille Bed and Breakfast (Official site)

(14 miles / 22.4 km)
The final day of the trail starts with a steep climb out of Kinlochleven. You spend the day surrounded by amazing mountain views, passing no fewer than 11 Munros (mountains of at least 3,000 ft.) Last but certainly not least among these is Ben Nevis, Britain’s highest mountain, which you pass right by on a somewhat rough patch of trail before heading into Fort William for the official endpoint of the Way.
Recommended Lodging in Fort William: Ashburn House (Book now)

Tips for the Trail

Photo credit: The Road is Long by atomicjeep on Flickr