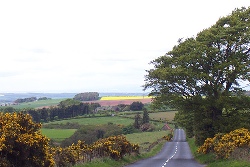 The climate of Scotland is temperate oceanic. Warmed by the Gulf Stream from the Atlantic, Scotland has a milder climate than areas of similar latitude in the rest of Europe. However, it also means that it has cooler and wetter summers.

The west part of Scotland is generally warmer than the east. Rainfall varies a lot from place to place and the sunniest city is Tiree. Snowfall is not common in the lowlands but becomes more so in the Highlands and as the altitude rises.

Here are some average temperatures for the most important cities in Scotland:

Current conditions and forecast for Glasgow