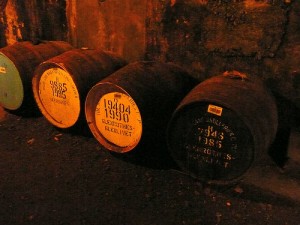 Scotch whisky is one of Scotland’s great loves, and one of its greatest exports as well. Each year, over 700 million litres of whisky is distilled throughout the country. But one of the great things about Scotch, for both the liquor enthusiast and the traveler, is how much the flavor and character of whisky changes from region to region, and often from town to town. Although every brand is unique, whiskies from the same local area tend to have similar tastes, owing to the qualities of the local water, the specific distilling methods, and other factors. So in getting to know your Scotch whiskies, it helps to first know the four basic whisky regions of Scotland.

>> If some of the names on this page read like Greek to you, check out our guide to pronouncing Scotch whiskies for a little help.

The Speyside, or Strathspey, region of northeastern Scotland is the center of the country’s distillery business. At the time of writing, 46 distilleries are currently putting out whiskies in Speyside, more than any other region in the country and nearly as many as the other three regions combined. Speyside Scotches include some of the most popular brands, especially overseas, including Glenfiddich, The Glenlivet, The Macallan, and Balvenie. Speysides have a tendency to be sweet, rather than particularly peaty, and are thought to be some of Scotland’s most aromatic brands.

Though geographically speaking, the Speyside region is part of the Scottish Highlands, the Highland whiskies from outside of Speyside are a whole different animal. This is by far the largest region and so it isn’t surprising that there is a lot of variety within the Highland Scotches. The western Highland whiskies, represented by brands like Oban, Talisker and Ben Nevis, tend to be dry with a spicy or peppery taste. The northern Highland malts like Glenmorangie and 2009 World Whiskey Award winner Highland Park are slightly salty with more floral notes in their flavor. The central Highlands, home to Dalwhinnie among others, tends to produce sweet whiskies with a very strong aroma. On the eastern side of the region, the whiskies are smokier, and some can have a bit of fruity taste.

The lowlands of Scotland tend to produce a milder class of whisky, which have always been popular south of the border in England. As opposed to using malt, as most distilleries do, some lowland brands are grain whiskies, using not only barley but also corn and wheat in their process. Glenkinchie is a great example of a lowland Scotch. If you are looking to introduce someone to their first Scotch whisky, a relatively mild lowland brand might be the best choice.

Islay is the southernmost of the Inner Hebrides, and though it is home to only eight distilleries, they are considered so unique from the rest of the Scotches to warrant being thought of as an entirely different region. Islay Scotches often include peat, leading to a deep, earthy flavor. They can sometimes be salty, similar to the northern Highland malts. Two great examples of Islay whiskies are two of the most celebrated brands of the last decade, Ardbeg and Laphroaig.

>> To have a look at the various whisky regions of Scotland and help plan your Scotland trip, check out our Scotland map.